So I made my national television debut today. yay!

A friend of mine from BBkings happened to need some models for a segment (the magazine happened to be a sister magazine of the one that laid me off)
I enthusiastically accept and call time is 8am.
I later find out I'm to do the shoot with my buddies Alex and Maranda which calms my nerves a lot.

I go straight into hair and makeup. While sitting in the hair chair, I get a glimpse of Martha Stewart who is a guest on the TODAY show that morning. I think it's funny when the 'competitors' are guests on each other's shows. 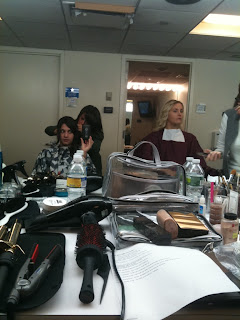 I find out I'm the first look of the lineup(Sweet!) Hair is a low chignon and makeup is glam with red lips. Not too far off from my average going out style. LOL
I then try on the shoes. They're 2 sizes too big. I'm not kidding. For whatever reason they couldn't get size 7 shoes. I wore them anyway with hoped they wouldn't notice. She mentioned my 'look' is very Audrey Hepburn with the cashmere black turtleneck, black cropped pants and a stylish trench and ballet flats. Funny. This is my favorite look. "Audrey" was my fashion icon.

Then came the waiting game. We weren't allowed to sit once dressed. Understandable but annoying. Everyone looked gorgeous. The producers and the camera talent were hilarious and made us laugh until the camera's were rolling. My heart was beating super fast when they called 'places' and did the countdown but I just went out there and did it. It's so much more private, no audience or anything, just the people around you filming. I can totally do that. I think my nerves are what kill my theater auditions.
Film I can do.
Bring it. 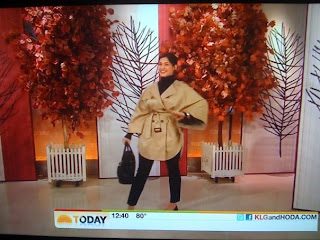 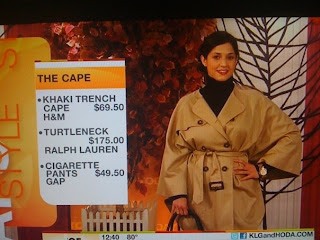 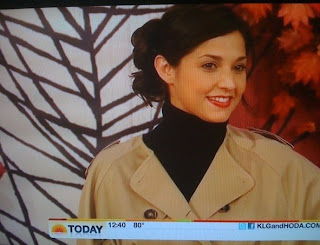 From the mind of Frances Marie at 1:41 AM